International schools present students with a cultural experience like no other. These schools promote education from a global perspective which builds strong cultural understanding in students. Studying a curriculum such as the British (IGCSE), the American or the International Baccalaureate (IB) can have students learn more about the world beyond classrooms.

Ensure the best education for your child by enrolling them into a High School in Dubai.

Since students from all around the world come to Dubai International Schools. Studying here has a major benefit. It instils the value of living in a culturally diverse environment in children.

The UAE’s education system is influenced by the west and it prides itself in having some of the best universities in the Gulf region.

Stages of Education in Dubai

For children from four to five years old, kindergartens in Dubai teach art, music, religion, English, Arabic and Maths with myriads of activities for the kids.

Some schools conduct entrance tests for enrolling in the primary level. The new term period starts in September in many British schools and IB schools in Dubai. And during July and August, all schools are closed for holidays.

English is the medium of language in most of the schools in Dubai. Many schools teach children other foreign languages as well, like French, Hindi, and even Russian.

For 15 to 18-year-olds, Dubai has many international high schools that offer Indian CBSE to IGCSE curriculums to expats and domicile residents. Some compulsory subjects in many schools are math, social studies, religion, physical education and Arabic. Students can also choose the subjects they prefer, like science, languages, sociology, history, computer studies etc. The offered subjects depend on the school’s curriculum. Also, many secondary schools require students to take standardized tests before enrolling, like Advanced Placement, SAT, IB Diploma, IGCSE, GCE Advanced level or CBSE.

The Knowledge and Human Development Authority (KHDA), the Government of Dubai, is the primary regulatory authority in overseeing the growth, quality of education and learning for Dubai’s private schools. Each year, the KHDA inspects over 140 private educational institutions in Dubai and publishes reports which can be for schools and parents.

Furthermore, as the expat population in Dubai is growing rapidly, the demand for quality education has risen. More and more international schools in Dubai are established, but as a parent how do you choose the best of the best schools for your child?

Below we have selected some international schools in Dubai, for their quality of education, with a strong parent and teacher support community and the variety of extra-curricular activities available to students.

The International School of Choueifat (ISC)

ISC opened their doors in November of 1978. In the course of its 35-year long history, the school has produced thousands of graduates from different nationalities who have gone on to study and pursue their education at prestigious universities such as Cambridge, Oxford, Harvard, Princeton, MIT, John Hopkins and many others. ISC Abu Dhabi is part of the global SABIS network of education, and it has high academic standards. The school promotes good social and moral values and much more.

This is a renowned Canadian school in Abu Dhabi that aims at top-notch education with advanced creative digital learning methods. The school’s mission is to have students graduate as thinkers and innovators that are prepared to face the outside world, and its vision is academic, social, emotional and physical development as its core value.

This school has a global network with over 15,000 students across 23 campuses in Singapore, Malaysia, Japan, Thailand, UAE, Vietnam, and India. GIIS has fast become one of the most sought-after High Schools in Dubai. They focus on the use of technology with Robotics/Maker-space, and 3D studios. They conduct webinars with other GIIS campuses. Their classrooms are equipped with touch screen interactive boards. They also offer Computer Science labs, the Tech Immersion & Maker Space lab and advanced science laboratories.

With technology and creativity seen as one of the most important skill sets, GIIS provides a Microsoft IT Academy for the students to lead in technology.

The school started in the year 2013 and follows the National Curriculum of England. They develop students’ personality, leadership skills and values. GEMS’ campus consists of a huge ground and two buildings. Every class is equipped with Wi-Fi. There is a multipurpose sports hall, an auditorium, sports fields with a quad area, music, art and craft rooms, science and computer laboratories, a library, medical care and a school canteen with a savoury menu. The school also sets a high standard for its students’ presentation with a compulsory uniform.

Overall, living abroad helps students expand their horizons and understanding of the world that works beyond their immediate culture and community. This gives students a chance to see a new way of life and embrace new opportunities in a variety of important areas. How To Become A Pastry Chef? Know The Qualifications Which is the best among all Indian Nurseries in Abu Dhabi? 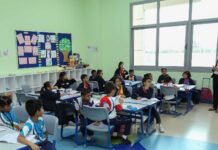 How to Choose the Right Curriculum for Your Child in Dubai International School?